Cruising above the 49th Parallel Over the past several years, CSC has organized a number of epic dinghy cruises: to Angel Island (with camping!), out under the Golden Gate Bridge, and to China Camp, just to name a few. Although I've missed out on most of these, I recently got to take part in something equally awesome: a three-day cruise from Vancouver to Keats Island, organized by the UBC Sailing Club.

Keats Island lies northwest of Vancouver along British Columbia's Sunshine Coast, about 13 nautical miles from Jericho Sailing Center, where UBC Sailing houses its boats. The island is home to Plumper Cover Provincial Park, which sports a beautiful campground, and is only accessible by boat.  The route there from Jericho involves sailing out from the English Bay into relatively open waters in the Straight of Georgia, before passing through a channel north towards Keats.

Our fleet left Vancouver on the morning of Saturday, August 1st, and consisted of seven Vanguards, two Hobie 16s, two F18 catamarans, and one RS500. We had a chase fleet consisting of a larger powerboat, a Boston Whaler, and a small Zodiac. Most of our gear, as well a number of participants not lucky enough to get a sailing spot, got transported to Keats on a water taxi. All told, we had about 40 participants. Since Plumper Cove doesn't allow campsite reservations, we had shipped a number of tents and a few brave campers over several days earlier to stake out our spot. The first Monday in August is a holiday in British Columbia, so we needed to ensure that we had somewhere to camp.

On the ride over, I helmed one of the F18s. We were the last boat to leave, since we got stuck taking care of a million little tasks for others (as well as making a last minute decision to replace the trap lines on our boat). The wind was more or less westerly the entire trip; in the English Bay, it was a nice 12 to 15 knots, but it tapered off to around 8 knots or so as we sailed out further into the straight. Being one of the fastest sailboat in the fleet, we quickly caught up to the Hobies and some of the Vanguards, and helped make sure that the stragglers were doing alright. In total, on the trip to Keats we traveled about 27 nautical miles over a bit longer than three and a half hours, with an average speed of 7.5 knots and a max speed of 12.3 knots.

Once we arrived, we set up camp and got to the serious business of relaxing and enjoying ourselves. The weekend was characterized by great food (blueberry pancakes, burgers, pasta salad), great drink (mojitos and a keg floating in the middle of a giant party island), and great socializing. Despite there being a campfire ban, both Saturday and Sunday nights we had a grand old time singing around a propane campfire. Saturday there was plenty of time for sailing, hiking, and swimming.

Properly securing our boats while we were at the island proved to be a bit tedious. It took a bit of finesse, but we eventually got three anchors set in the cove, where we moored our cats. We initially beached our dinghies at the same cove, but the flood tide proved to be a bit too high, so that we had to tow the dinghies around a point to another beach, and then drop the masts so that we could carry them up under a line of trees to a lawn. The F18s survived the mooring just fine, but the gentle rocking of the waves caused a metal piece attaching the Hobies' bridles to their hulls to  suffer some serious wear and tear. While departing for Vancouver on Monday morning, this piece failed on one of the Hobies, causing the mast to come down. Fortunately, we had the requisite supplies to make a quick repair, and caught the problem on the other Hobie before the mast came down. 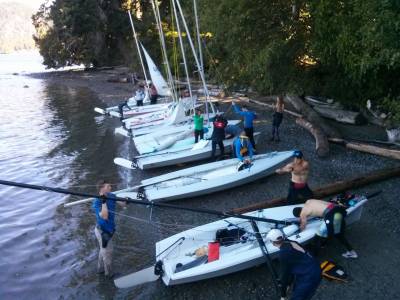 For the return trip Monday, winds were forecast from 15 to 25 knots, so we were all pretty excited for a quick (albeit wet) trip back. Once we got out into the Straight of Georgia, however, the wind failed to materialize, and we were plagued by a southerly, instead of the westerly we had hoped for.  I skippered the RS500 back, which proved fortunate: we got to leave before any of the cats, who ended up with even worse wind than us. The GPS track pictured above is the track of our voyage home. We initally sailed as high to the wind as we could, since we wanted to fly the kite as along as possible.  We set the kite when we were due south of Bowen Island; you can see from the track that we changed course there. Given that we were close hauled before, you can see that the wind was light enough for us to sail above a beam with the kite up!

Once we got back into the English Bay, the wind picked up enough for us to start planing; we clocked in a top speed of 12 knots. The wind had shifted more to the west, so we ended up having to make several jibes before returning to Jericho. The return trip took a total of four and a half hours; we covered 20.8 nautical miles with an average speed of 4.55 knots. While not exceedingly fast, it was quick enough to win us the honor of being the first boat home. The rest of the fleet filtered in over the next couple of hours, and our remaining food got consumed in an impromptu barbecue.

All in all, the trip was immensely fun. A lot of people put in an incredible amount of work to make it all happen. I can't wait to do it again next summer!