Don't be afraid of the radio 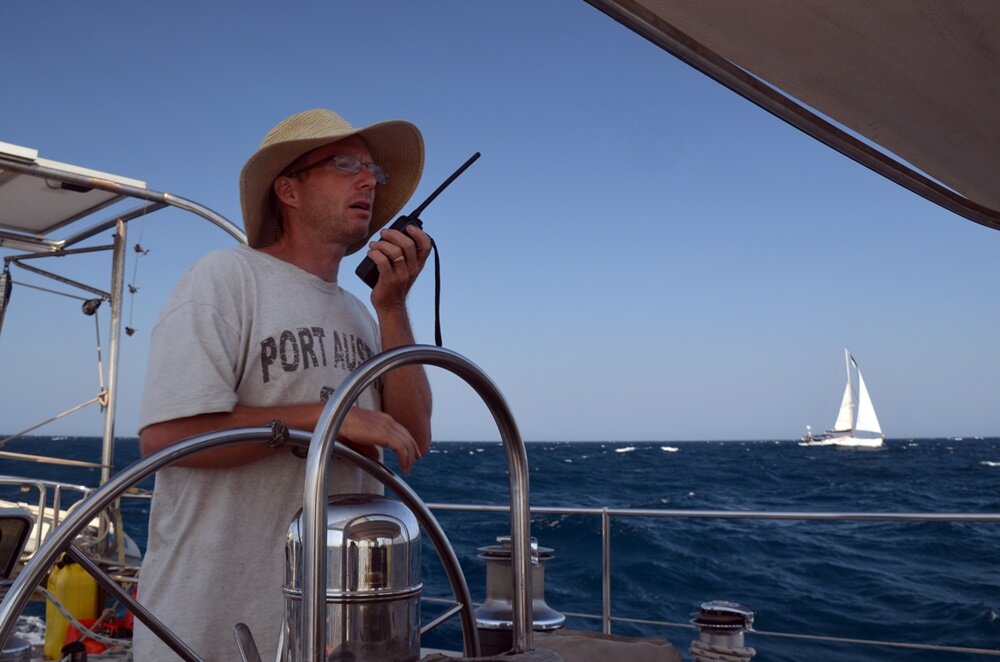 Some radio advice for those that hope to start sailing the bay (or beyond).

It's required by Coast Guard that if you have a radio, you have to monitor channel 16.  There are good reasons for this.  But beyond talking to the dayleader for a radio check, we don't actually use the radio much.  On the keelboats, often times we get annoyed by all the chatter on 16 and just turn the radio down, which is understandable.  Usually if we're sailing, we're teaching, and the noise is a distraction.  Add to the fact that whenever we are monitoring, we hear a lot of official chatter that can make using it to hail another vessel, or the coast guard, seem like a big deal, which it isn't.  So spend some time listening to the radio.  Pay attention to how the coast guard talks.  If you're on a cruise or out in the bay near shipping channels, turn on channel 14 (vessel traffic).  You'll hear how the container ships and ferries talk to vessel traffic control about where they are and where they're headed.  That way if you do have to hail the coast guard it won't seem like an unfamiliar and big deal.

I had another opportunity to hail on the radio recently.  We were headed out of the gate and were between Angel Island and Alcatraz.  We had seen a container ship coming from Richmond that was now out of site, and could now see a container ship outside the gate, but couldn't tell which way it was going.  We were about to potentially be in the way of both of them, depending on where they were headed.  So I went to channel 14 and basically just asked 'hey where are these ships going?':

Me: Vessel traffic this is sailing vessel Mariya (not the name of my boat but it's not an easy, radio-friendly name, so I often make something up) on 14.  Do you copy?

Me: Vessel traffic we're heading under the gate and are in the vicinity of Alcatraz and see a container ship outside the gate and can't tell if it's going out or coming in.

VTS: *Now understanding why a sailboat is hailing them* The container ship so-and-so is bound for Richmond and will be taking the Eastbound shipping channel.  *Pause* There is also a ship coming from Richmond bound for the gate, and will be stopping at Point Blunt for a pilot change then taking the Westbound channel.

Me: Vessel traffic, copy that, thank you.  Mariya out.

So how familar are you with the SF Bay charts?  A few things were said there which wouldn't help clarify the situation if you didn't know where they were talking about.  Point Blunt is the Southeast corner of Angel Island.  The Eastbound traffic lane is between Alcatraz and SF, and the Westbound lane is between Alcatraz and Angel.  So now I knew where they were headed.  The one from Richmond was going to stop off of Angel Island and then continue to the gate along the North of the bay, and the one coming in was going to go along the SF cityfront.  Our best option, from where we were, was to head closer to Alcatraz and get in the middle.

You think the Golden Gate Bridge is a pretty long bridge, and when you're the only one under it, it's massive.  But now we were headed towards it with a container coming up behind us on our right, and anohter coming at us on our left.  The gate has never looked and felt so narrow.  Since we knew where they were going it wasn't too nerve-racking, but to say it wasn't at all nerve-racking would be a lie.  If we hadn't radiod and didn't know what the ships were doing, it would have been terrifying.

We had another instance where we were heading East between Alcatraz and Angel, and suddenly saw there was a container behind Alcatraz coming straight at us.  Being a sailboat it's kind of hard to just 'get out of the way', so I jumped on 14:

Me: Vessel traffic this is sailing vessel Azkaban (not really) on 14, do you copy?

VTS:  Azkaban this is vessel traffic.

Me:  We're between Angel Island and Alcatraz heading East and see a container ship coming at us, looks to be heading outbound from Alameda.  Which direction should we head to get out of their way?

VTS:  The pilot on board is Bravo (something like that), coordinate with them on channel 12

Me:  Copy that, Azkaban out.

Bravo:  Azkaban this is Bravo

Me:  We're between Angel and Alcatraz and see you coming at us, would you prefer us to turn towards Angel or Alcatraz to get out of your way?

Me:  Nevermind Bravo, I see you're turning away, Azkaban out.

So we didn't actually have to do anything, and I don't know if our radioing is what made them start their turn, but in the least I knew they knew we were there, and if there was a concern they would let us know.  Plus the whole back and forth only took 30 seconds.

If in doubt, hail on the radio.  Whether it's the coast guard, vessel traffic, or another boat that's coming at you irratically and you don't know what the heck they're doing.  As with communication on the boat itself when sailing, more is better.  Don't chit chat needlessly on the radio, making everyone else hear about what beer your drinking and other ridiculous things I've had to listen to while trying to monitor.  But also don't be afraid to ask 'what are you doing?' or 'what do you want me to do?'.