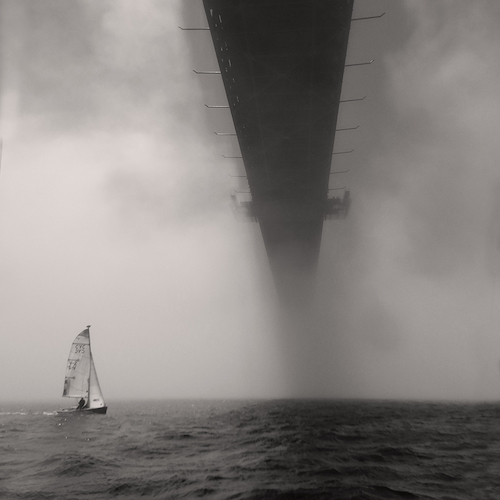 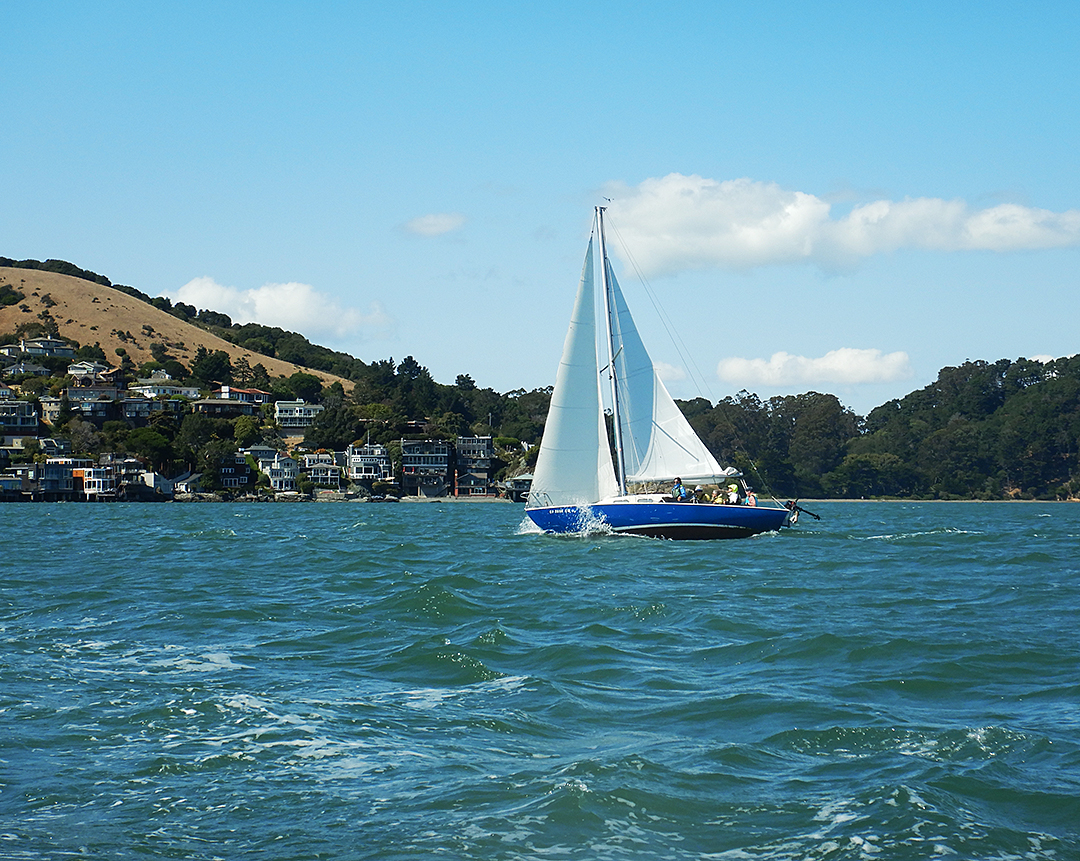 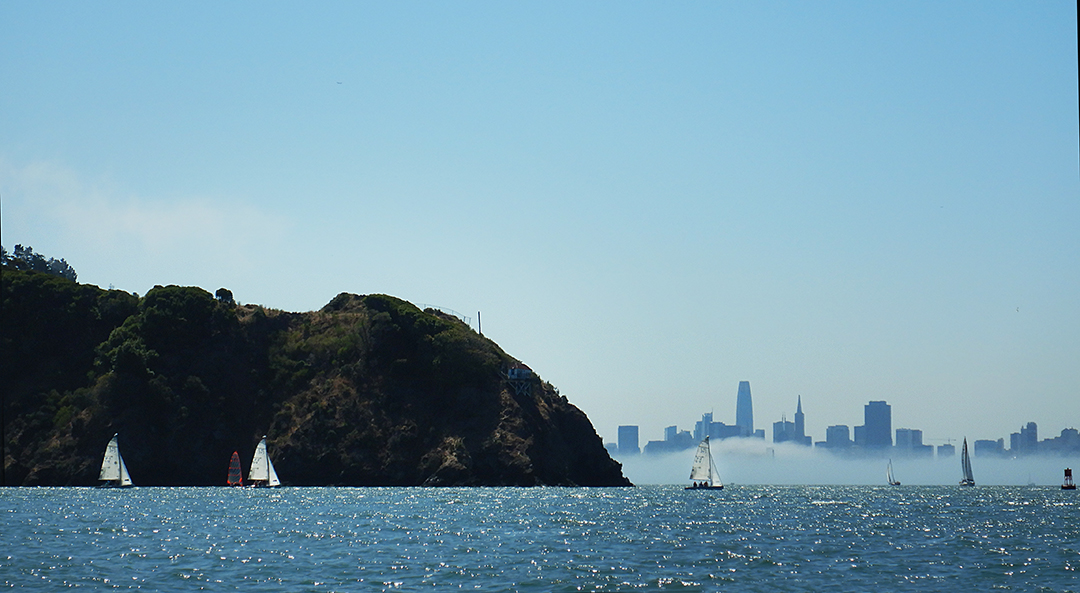 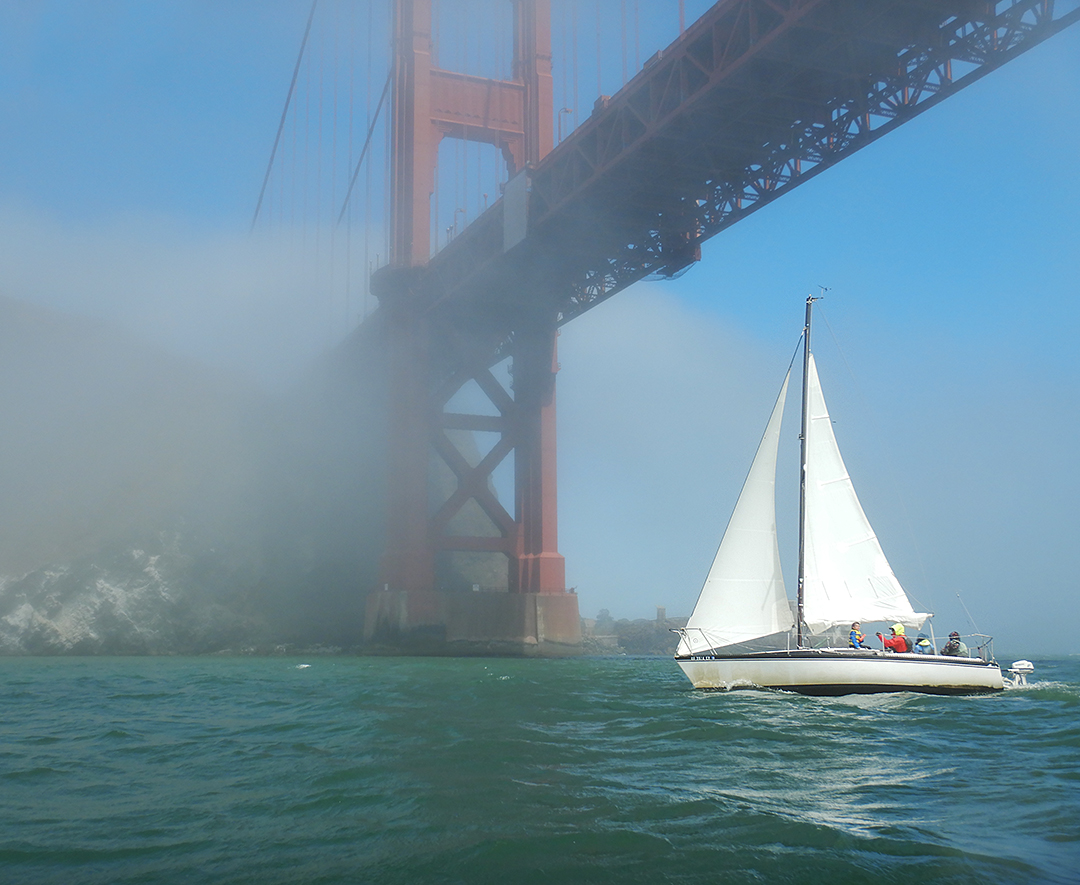 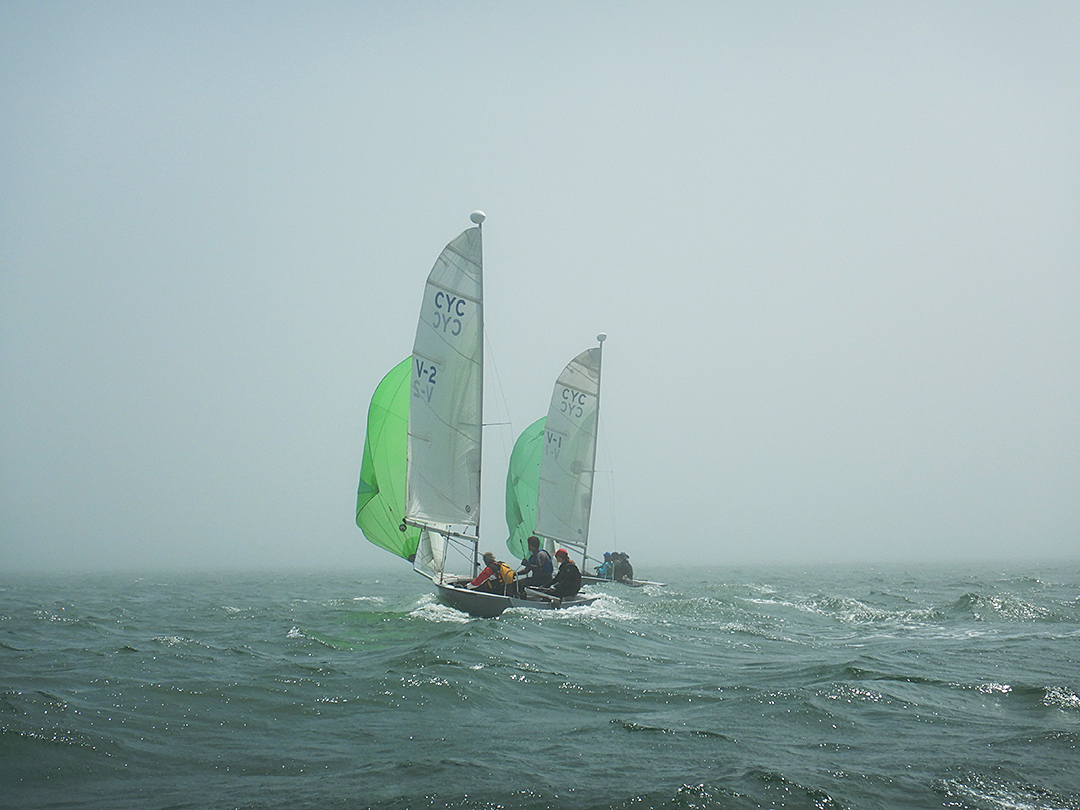 The sound of Ryan’s voice issuing the mariners warning, one level below a MAYDAY, was a comfort. I was being watched over.   As I struggled to get the sails back in the boat, I could see the other boats nearby.

We had left Berkeley the day before, 4 Ventures, two club keel boats and a couple of private boats tagging along. All bound for the kayak beach at Angel Island. We had a lovely and uneventful upwind sail to the beach. We anchored the keelboats and ferried the sailors, gear and supplies to the beach. After humping everything up the hill to the campsite we had a feast, sausage, peppers & onions, salad, cheeses, charcuterie, beer, wine and on and on. Some of us went to bed early, while others hiked to the top of the island. Ah, youth.

We woke the next morning to heavy fog both in the air and some heads. Tiburon, which we could see the night before, had disappeared. We made radio contact with Carolyn on one of the keelboats, and started making a leisurely breakfast while we waited for the fog to lift. By 11 AM we had broken camp, gotten everything loaded up and got off the beach. As we sailed out of Racoon Strait, the Golden Gate Bridge came into view and with it the fog. Carolyn had found a tear in Daisy’s main sail and made the decision to head for home. The rest of us continued on towards the gate. We got a little far apart, so the lead boats tucked into Horseshoe Cove and waited for the rest of us to catch up. There was a short discussion over the radio, and the decision was made to go under the bridge and then head for home. Because of the remaining fog we would maintain a close formation, do a radio check for vessel traffic and stay close to the North tower where there is less large ship traffic. 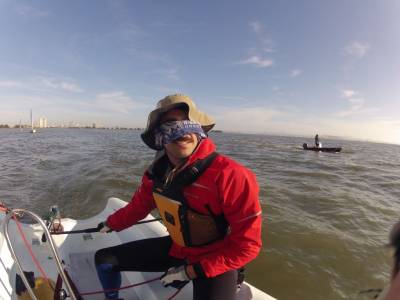 When we sail we use all our senses, but the one we rely most heavily on is our sight.  This was brought home to me when I took my first Wednesday night keelboat lesson several years ago.  I had grown accustomed to using the telltales on the shrouds to get a general sense of the wind when sailing the dinghies.  I even carried some bits of yarn in case the boat I was on didn’t have any.  I took the helm on the keelboat on a dark night and--oh crap--I couldn’t  see the tell tales.  I struggled that night, but realized that what had started as an aid had become a crutch.

The last Monday night advanced dinghy class, we worked on sailing without any sight at all.   But you don’t need a class to try it.  First make sure you have decent crew who is not blindfolded, and that you’re in an area with a lot of space (few boats and no obstructions).  Pick a day with moderate wind.   Put a blindfold on and try to hold a course.  Your crew can give you feedback.  Try to feel the puffs of wind before they hit the boat.  Pay attention to the balance of the boat.  Listen to the sound of the boat moving through the water.  Play with the main sheet.  Can you tell when the boat accelerates and decelerates?  Smell your gear, yeah, you should probably wash it.   Try sailing different points of sail.  If you’re feeling confident try a tack.

It’s as easy as bagging womp rats back home in Beggar’s Canyon. 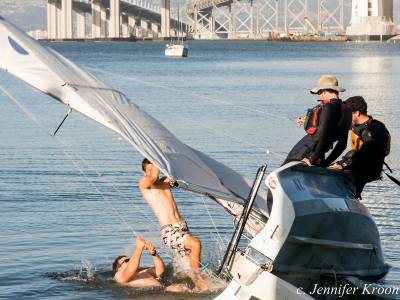 It was Friday the 13th, and a full moon. What better time to go on a cruise; what could possibly go wrong?

Eleven sailors in five dinghies left the dock at about 4:30pm. A little later than the announced departure time, but about when I figured we would actually shove off. The wind was very light in the junior area but picked up to a lovely 10 knots or so once we got a bit past the restaurant. We had a pleasant and uneventful sail to Treasure Island, and pulled our boats up on the little beach at Clipper Cove. Of course we had the traditional capsizing of the last boat to arrive.

With the boats pulled well above the water line, we made the short walk to the Treasure Island Bar and Grill. I don’t know about everybody else, but while I enjoyed my food I kept thinking: I hope the wind doesn’t die, I hope the wind doesn’t die, I hope the wind doesn’t die. After eating, kibitzing and telling lies about how fast we had sailed there, we walked back to the boats. I looked out over the water and, you guessed it, the wind had died. Now, this wasn’t the end of the world. We had the sketch motor mounted on the Venture, but it was going to be a slow slog back with a 2 horsepower motor and 5 boats. As we looked despairingly eastward at the glassy water, what did we see? Could it be? Yes, it was Michael “The St. Bernard of the Sea” Moore coming towards us on the rescue skiff! He brought the skiff up to the beach and casually asked “Do you guys want a tow?” We got the boats off the beach, and Michael maneuvered around so we could each attach our bow painters to the tow line.