There often isn't enough communication around how to use the hoist properly.  In this post we're going to talk about safety, efficiency, and some tips on dropping and pulling a boat single-handed.

The two big rules of using the hoist are:

The first issue most comonly happens when the centerboard falls down and someone reaches under the boat to push it back up.  Or if there's a long line of boats waiting to come out of the water and as soon as one boat starts to go up into the air the next person walks their boat down towards the sea wall.  Then when the boat in the air swings out, it's over the other boat.

Both of these are huge no-no's.  The sling/hoist does break.  This happened recently with a Venture in the air that ended up falling 5 feet back into the water.  The boat and everyone around was ok, but If there had been another boat underneath, waiting their turn, it'd be two broken boats instead of zero.  If there had been someone on that boat waiting to attach the sling, as there often is, it would have been way, way worse.  Always beware of where the boat is, and never get underneath it, and please say something if you see someone about to.

One of many people's goals is to be able to single hand a boat.  But first you probably have to get it in the water.  Usually there are plenty of people around to help you drop a boat, so don't hesitate to ask.  But if there's no one around, or you just want to try to do it yourself, here are the steps.  As always, there are other ways to do it, these were the ones shown by me and seem to be the most common.

This part is fairly easy.  First, get an extra line and tie an extension to the bow painter (how's your double sheet bend?).  You want to at least double the length of the painter.  Lift the boat like normal and push it out as much as you can.  You should already have the bowline in your hand.  Now, this is where we break the rule of 'someone should have control of the boat at all times', because we're about to let go of the boat.  Before we do that, steady the boat so it's not spinning.  The wind will make it spin once you let go, but you'll have a few seconds after you let go.

This is the only part where you need to hurry.  Let go of the boat and take the bow painter out to the ramp and go almost all the way down the ramp and pull the bow to steady it and make sure the shrouds aren't hitting the hoist.  Then pull the boat closer to the dock and walk up the ramp about to where the dock cleat is.  Tie off the bow line to the ramp rail.  Leave a little slack, but not enough for the boat to spin into the hoist.  Go up to the hoist and lower the boat until the bow line gets taught.  Watch the stern and rudder and make sure it's not hitting the sea wall.  Go back to the ramp and untie the line and take it around and tie it to the normal cleat on the dock and lower the boat the rest of the way and you're done!

If the tide is high and the boat doesn't have far to go to get into the water you might be able to skip the multi-step lowering.

This is a bit trickier.  After you attach the sling you have to keep the bow pointing in the right direction while also allowing you to pull the boat in over land.  First, attach a bow line extension again.  Tie it to the ramp, towards the outward end using a breakaway knot: https://www.youtube.com/watch?v=7cIHjoYj2kA 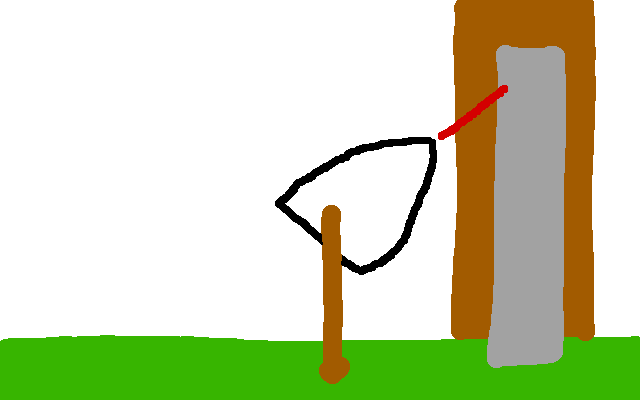 Leave enough slack so that the stern can reach the sea wall, but not so much the boat can spin and hit the hoist.  Make sure the knot is secure enough that it won't slip free before you want it to.  Go up and use the hoist rope to pull the boat to you.  When you can reach the stern, give it a good hard tug and if you did the breakaway knot correctly, it should come free.  Then the rest of the process is normal.  If the dolly isn't already in place, when you go forward to grab it, take the bow line with you so you can stop the boat from spinning in the wind.

An alternative to the breakaway knot is to extend the bow painter enough that you can go around the normal cleat and take it with you up to the hoist.  You can keep the boat pointing towards the dock as you pull it in and let the line out as needed.  The thing to watch out with this is the extended bow painter probably has a knot in it somewhere which can catch on the cleat at some point.

Our primary concern with the hoist (and with everything else at CSC) is to keep you safe.  Secondary is keeping the boats from breaking.  Everything else is just to make our lives easier which makes everything more fun.  The easier (and faster) you can safely get the boat in the water, the sooner you can get sailing!

Planning a cruise around Alameda, and an old navig...
More on Low Tide Docking