I wrote a blog a while back on low tide dinghy dockings, and this was focused on the really low tide screnario - absolutely no centerboard and minimal rudder, and how to get the boat to the dock in those conditions. You can't slow sail without a centerboard, so you need to do something different.

But that's the extreme case. Often, it's not quite that low, and so you have a few more options.

But let's take a quick detour (a parenthesis in Italian) and talk about tides. We use tide tables and graphs all of the time, including predicting when the Club will be closed because the water is too low for the rescue skiff to run.

Tides are extremely complex as they depend on a huge number of factors. The major factors are the gravitational effects of the sun and the moon, and so tide tables are based on observations over a period of time (maybe as much as 19 years) to see these effects in all of their combinations. Tide predictions are based primarily on these large scale astronomical forces, and they do not include significant yearly, monthly, and daily factors such as rainfall, runoff from rivers, even barometric pressure on a given day.

Tide tables give you an approximation only,but we do have information about how predictions are matching reality. The closest station which reports both predictions and reality is the Richmond Inner Harbor, and our website monitors it and reports the current difference between predicted and actual both in when the Club will be closed and in the Club Status (which you can click on in the Cal Sailing home page).

Another thing to think about is that the nautical charts aren't really accurate in lower tide areas. They show 4 to 6 foot depth at zero tide in the Berkeley South Basin, lesser near the shore, but there's a lot of variation there, and it changes over time. Just look out there at a significant negative tide to see the variation (and the grooves the rescue skiff makes when the motor is not raised sufficiently at low tide).

But roughly speaking, at zero tide there's about 1 foot depth at the sea wall at our dock and 2 feet at the end of the dock at zero tide.

So how to use these numbers. An RS Quest draws 3'9" with the centerboard all the way down (maybe a little more or a little less, depending on crew weight). A fully down rudder is maybe a foot higher than that. My personal rule of thumb is that at any tide prediction below +3.0 (adjusted for predictions versus actuals), I'm thinking about raising the centerboard on the way back. The rudder may be OK until it gets below +2.0.

Going out, it's no problem. You put the centerboard down, and if you hit mud, you bring it up an inch or two. You put the rudder down, run it back and forth and see if it churns mud. You do have to think of it coming back, though, so it's best to know the tides and decide whether you need to raise one or both before one or both are dragging in the mud.

If you're coming back in between the docks and the boat just isn't doing what you want, think about raising centerboard and rudder. You may have quite a time controlling the boat after you do this if you're deep between the docks, but that's a different blog.

I'll end the detour here (or close the parenthesis, in the Italian idiom) and get back to docking.

So it's a day where the tide is low, but not so low that you have to raise the centerboard completely. Since the water is deeper at the end of the dock, the best plan is to dock there, possibly like this: 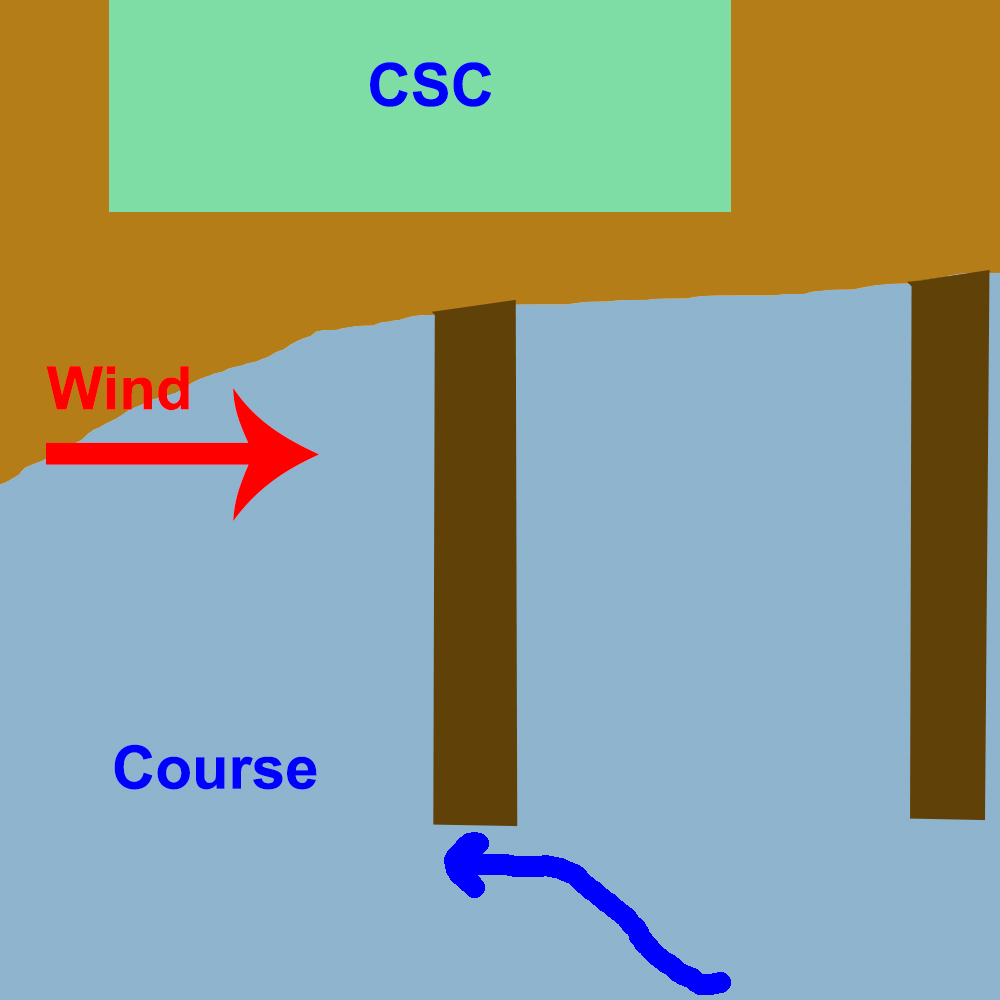 If you can keep at least a little centerboard down, you can probably do this slow sailing. Otherwise, just try to "shoot up", remembering that you need some centerboard to do that.

Some tips. On a Quest, the centerboard is held down by friction, and it doesn't stay down easily when very little of it is in the water. If you have crew, have them hold it down as much as possible without dragging in the mud. You can also create some "centerboard" by having the crew go way forward in the boat, which creates a sort of centerboard with the forward hull.

Go out and practice this in higher tides so that you'll be able to do it when you need it. Or just resign yourself to jumping out near the dock and dragging the boat through the mud. Both techniques work, but I prefer the first.